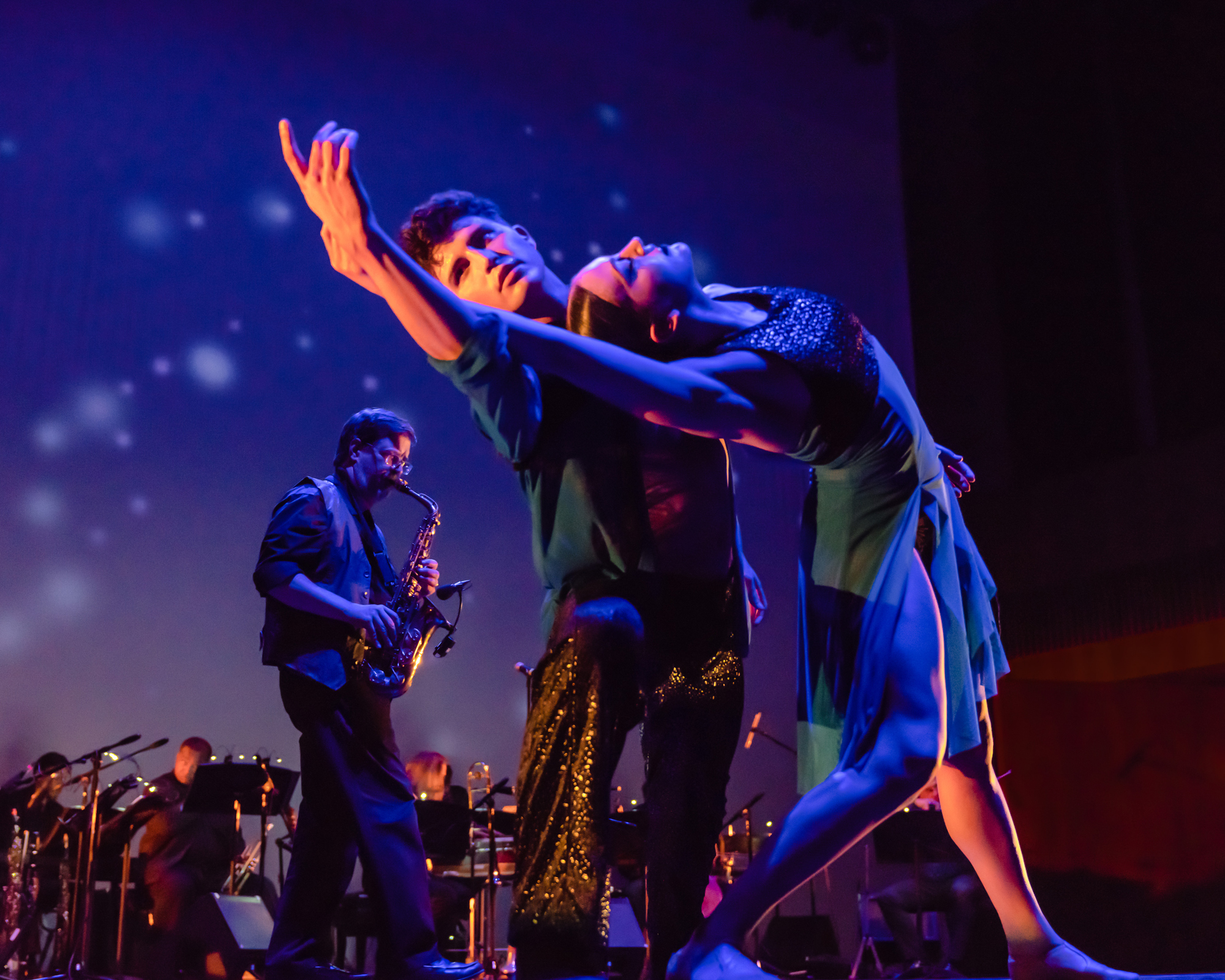 There can’t be too many things in Dance more complicated, more challenging, or more promising than the collaboration between choreographer and composer. But there probably aren’t too many people in Dance or Music better able to tell us about the mysteries of this process than Joe Cerqua. Cerqua is the Co-Founder of Cerqua Rivera Dance Theatre, and at Cerqua Rivera, dance and music are richly and relentlessly interwoven in everything the Company even thinks about.

There can’t be too many things in Dance more complicated, more challenging, or more promising than the collaboration between choreographer and composer.

When Cerqua Rivera takes the stage at Chicago’s legendary Auditorium Theatre on Saturday, August 18th, they will be performing an intricately vivid piece called Between Us. Between Us combines the choreography of Sherry Zunker with an original composition by Joe Cerqua, and we thought this would be a perfect time to ask Joe to tell us about working with Sherry, and about what we’ll see at Dance for Life. Once we got him talking, though, we couldn’t help ourselves — we had to ask him to tell us a little about the new piece he’s working on with Monique Haley for Cerqua, because in just a few weeks (on July 26 at 7 pm at Dovetail Studios to be exact), it will be featured in one of Cerqua Rivera’s trademark Inside/Out performances. Here’s what Joe told us:

In developing the score for Between Us, Sherry and I first began by talking about what she wanted to say.

Johnny Nevin: Cerqua Rivera is presenting the piece Between Us at Dance for Life 2018, with choreography by Sherry Zunker and the original score that you composed for the work. Can you tell us a little about what the audience at Dancer for Life will see when Cerqua Rivera takes the stage? What was the process for developing the score?

Joe Cerqua; First off let me say how much I love Sherry Zunker’s work. I have been a big fan of hers for over twenty years. So when I got the chance to compose for her I was very excited to say the least. (Also a little nervous.)

In developing the score for Between Us, Sherry and I first began by talking about what she wanted to say. Sherry wanted to explore the different aspects of a romantic relationship — the beginning, middle, and the future. We talked about the initial feelings that we had when starting our relationships, and how the nature of our roles in those relationships have evolved. We both agreed that the score wanted to be jazz based.

Next I developed some melodies (which evolved a lot as the process moved forward) and the chord progressions that harmonized those melodies. Then we did a series of workshops with select musicians from the band, the dancers, Sherry, and myself.

The end result is a score that is melody based with lots of textures that all support the melody and guide the musician’s improvisations.

Sherry was very intrigued with the idea of the musicians improvising to the dancers, so we would base our improvs in the workshops on the harmonic structures of the pieces that I was developing. Sherry would give the dancers a phrase or series of phrases and we would begin to play. She also would guide the dancers through their own improvs as well.

This process did two really important things. First, it immediately developed a relationship between the dancers and the participating musicians, myself included. Second, it allowed me to get to know some of the choreographic vocabulary that Sherry would be using in the piece.

After those workshops I was able to evolve those initial melodies for the next steps. As the months went on Sherry would work with the new music for a couple of weeks, then I would come back to rehearsal and watch where the piece was going. Then Sherry and I would discuss what to do next to the compositions and I would continue to develop the score until we got it to the final product. It was an exciting, rewarding process. Sherry is a truly giving, nurturing collaborator.

The end result is a score that is melody based with lots of textures that all support the melody and guide the musicians’ improvisations. It features eleven dancers and a nine piece chamber jazz orchestra. All in support of Sherry’s incredibly emotional choreography.

For Dance for Life we needed to record the compositions, because there just isn’t the time to sound check a nine piece band in the constraints of that day. We will have the two main soloists — soprano sax and violin — playing live to the recorded tracks. Sherry is weaving the two musicians in and out of the choreography, continuing to explore the relationship between the dancers and the musicians. Between Us.

I sent Monique pieces that I had written in the past based on Gospel and Civil Rights music chord progressions and jazz melodies. Monique sent me pieces of music that featured jazz improvisations over African drums

Johnny Nevin: Coming up a few weeks before Dance for Life, Cerqua Rivera is presenting one of their Inside/Out performances (on July 26 at Dovetail Studios), where people get an in depth look at the creators and creative process for one of the Company’s works. This one is about a piece Monique Haley is creating, and for which you’re also writing an original score. It sounds like a very different work, and maybe a very different process as well. Can you tell us a little about that work and that process?

I am thrilled to be collaborating with Monique Haley after playing to her choreography, set to Stu Greenspan’s innovative arrangements of Miles Davis songs.  Monique’s new piece is exploring the African American experience. The score I am currently developing is a mixture of jazz and African rhythms.

We started our collaboration by sending each other pieces of music. I sent Monique pieces that I had written in the past based on Gospel and Civil Rights music chord progressions and jazz melodies. Monique sent me pieces of music that featured jazz improvisations over African drums. Next, Monique wrote me a very informative description of the journey that she wanted to explore. I then spent some time listening to a lot of different African drum patterns and grooves.

Then came the compositions. Currently I have developed two of the three pieces. They are based in Blues harmonies with strong bass lines and African drum grooves. The melodies are a pure mixture of jazz with African influences. The feel is an exciting urban vibe — mysterious, ritualistic, and very rich in their orchestrations. The pieces have a lot of swells and valleys as far as energy and orchestration. I believe that we are developing a very new and exciting sound. The third and last composition will be mambo in it’s inspiration. I’m very excited to begin work on this piece. It will be joyous and transformative, which was Monique’s direction to me.

Monique begins her rehearsals on July 9. We have agreed to work in a similar fashion that Sherry and I worked. Monique will choreograph to the mock recordings that I did of the compositions and I will come in to view the work at the end of each week and then continue to develop the pieces. Can’t wait to hear the music performed live and talk about the process on July 26th at Dovetail Studios. See you then!

The pieces have a lot of swells and valleys as far as energy and orchestration. I believe that we are developing a very new and exciting sound.

Cerqua Rivera Dance Theatre will present Sherry Zunker’s Between Us, to an original score by Joe Cerqua, at Dance for Life 2018 on Saturday, August 18 at 7:30pm at Chicago’s Auditorium Theatre (50 E. Congress Parkway, Chicago, IL). Tickets are available online from the Auditorium Theatre.

DANCERS AND MUSICIANS (LEFT TO RIGHT):