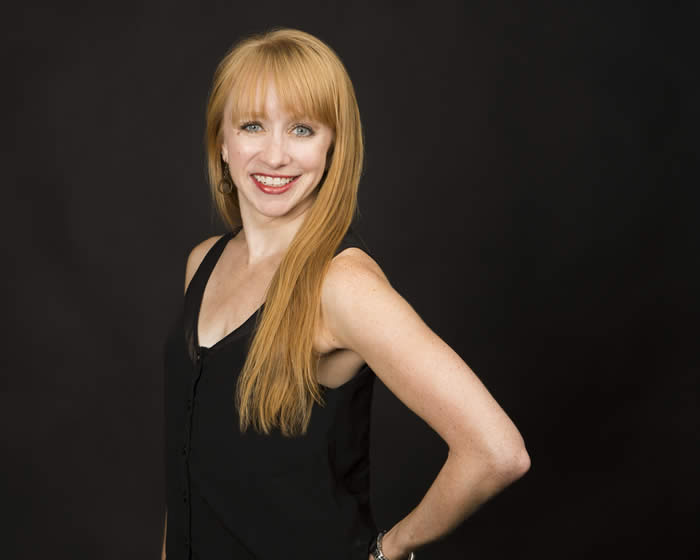 On a warm summer, Saturday evening each year, the Chicago dance community unites in spectacular form to support those with critical health issues. Dance for Life 2017 continues the 25+ year tradition, bringing the best of Chicago dance to the Auditorium Theater stage this coming August.

This year, Dance for Life welcomes Jessica Miller Tomlinson of JMT Choreography to the stage with ‘In Tongues’: a joyous choreographic work set to the music of The Talking Heads. Tomlinson, a seasoned member of the former Thodos Dance Chicago ensemble and recent addition to Adjunct Faculty at Northern Illinois University, is no stranger to the Dance for Life stage as a performer, but is participating as a presenting choreographer for the first time. KLic Creative caught up with JMT to get the inside scoop on what Tomlinson is working on for this not-to-be-missed evening of dance. Read on for our five part Q&A with JMT:

KLic: What inspired you to create this piece?

JMT: ‘In Tongues’ was created for several reasons. Firstly, I’m a huge Talking Heads fan. I find their music to be ingenious with its mix of pop, soul, funk and various other genres. They also have such a creative, theatrical, artistic influence in their stage performances and videos. My work was directly influenced by these concerts and their use of dance. I wanted to create a work that was more theatrical in feel than other work (I have made) up to this point. ‘In Tongues’ premiered in 2011 as part of Thodos Dance Chicago‘s New Dances Series and was inspired by David Byrne’s quirky over-the-top stage persona, for sure.

‘In Tongues’ premiered in 2011 as part of Thodos Dance Chicago‘s New Dances Series and was inspired by David Byrne’s quirky over-the-top stage persona, for sure.

KLic: How does this specific piece stand out among the others in your body of work?

JMT: ‘In Tongues’ was a piece that I used to push some boundaries for myself as a choreographer. Not only was it more theatrical than other works, but it was also my first attempt at using a predominately male cast (although in the end I added one female to represent the female bassist of the band). I found (all-male casts) to be a good fit for myself as a choreographer, and have since explored it again in different contexts. ‘In Tongues’ is also on the humorous, light-hearted side, which is not the case for much of my work.

KLic: In what ways is this choreographic project pushing or expanding your artistry?

JMT: Having the opportunity to re-stage ‘In Tongues’ has been extremely satisfying for me. Any time a choreographer is given the opportunity to revisit a work, there is automatically room for growth and expansion. This work was created at a time when I was extremely busy both as a choreographer and dancer. I was simultaneously co-producing a show – JMT/JLS Dance Gallery, with colleague Jacqueline Stewart – while creating ‘In Tongues’ for New Dances 2011. This was in addition to dancing for several other choreographers’ New Dances premieres. Although I am still very busy choreographing several new works at the moment, I have definitely turned my focus to creation rather than performance. It’s so rewarding to be able to revisit this work six years later and possess a knowledge of information that is totally different from the one I had the first time around. I also only have one original cast member, so it has been interesting seeing the interpretation of the movement and feel of the work expand. I’m able to really see new life and more clarity in the work after having taken some time away from it.

It’s so rewarding to be able to revisit this work six years later and possess a knowledge of information that is totally different from the one I had the first time around.

KLic: How does this particular work celebrate Dance For Life?

JMT: ‘In Tongues’ is a joyous, light-hearted dance. It is ultimately a theatrical, somewhat humorous romp. The work should not be taken too seriously. Rather, it should just cause one to have a good chuckle and experience ten minutes of dance entertainment. Even though Dance for Life is a benefit for a very serious cause, we should celebrate (with great joy and enthusiasm), the difference our amazing dance community is able to make by joining forces. This work celebrates Dance for Life because it truly embodies a sense of community. I myself am an independent artist, and am using dancers from all different Chicago companies as well as some independent artists, which is what this evening is all about – coming together.

KLic: Is this your first experience participating in Dance for Life? What does it mean to you to be part of Dance for Life as a choreographer?

JMT: Dance for Life is and has always been one of my favorite performances in the Chicago Dance Community. My very first Dance for Life performance was as a member of Thodos Dance Chicago, back in 2005 at the beautiful skyline stage at Navy Pier. It was so amazing to be a part of such a wonderful cause and to share the stage with some of the best dance companies in the city. I have had the honor of performing in Dance For Life as a member of Thodos Dance Chicago on four different occasions. To be given the opportunity to present my own choreography for Dance For Life is a dream come true.

I’ve been imagining my work on this program for some time, and am still in awe and disbelief that its actually happening.

I pinch myself each time someone says something about this opportunity. I’m so grateful to be embraced by this wonderful organization, and to have my work grace the historic Auditorium Theater alongside some of the most incredible artists in the city of Chicago.

Dance for Life 2017 takes the stage at the Auditorium Theater of Roosevelt University on August 19 at 7:30PM. For information and ticketing, visit Chicago Dancers United.