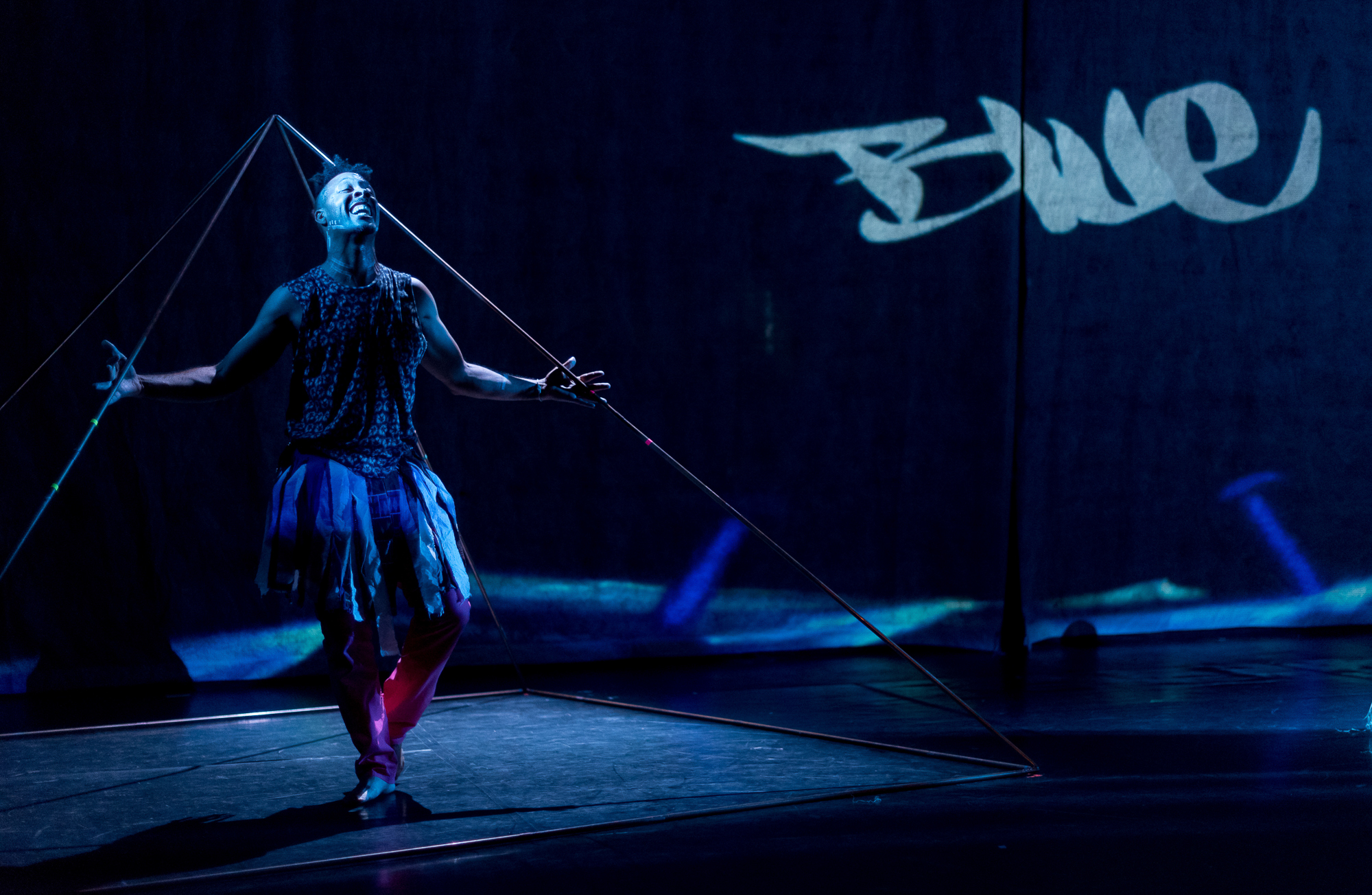 From the “I AM” perspective, I am an ARKivist. Hear to bear witness. To testify. To affirm. To wander and wonder. To get busy, get down, turn up, to dance vulnerable at the center of each fragile curiosity or alarming question.

You are a sum of your passions. It’s a saying I heard from my mother throughout my childhood, and one that has continued to inform how I choose to approach and live the life that I have been given. It has allowed me to embrace all of the things that I love, despite the everyday pressures and limits of time and money. And, as it turns out, it is the best way that I can describe the artist d. Sabela Grimes. He is a creator that is a sum of many passions, and those passions continue to flourish as they are fueled by a seemingly endless abundance of creativity and curiosity.

Take, for instance, Grimes’ passion for movement, particularly movement systems and ideas based in the physical and meta-physical efficacies of Afro-Diasporic cultural practices. This passion helps inform his work and led to the creation and continued cultivation of his movement system, Funkamentals, which focuses on the methodical dance training and community building elements evident in Black vernacular and Street dance forms. His passion for creation also extends into the realm of sound and score design, as each of his creative endeavors includes original sound designs whose components are recorded by Grimes as he travels and observes the world around him. His myriad passions have led to recognition of his work worldwide, including being named a 2014 United States Artists Rockefeller Fellow. Grimes continues to share his passions outside of the stage as an Assistant Professor of Practice (Hip-Hop, Dance History, Improvisation) at USC Glorya Kaufman School of Dance.

Recently, I had the opportunity to speak to d. Sabela Grimes ahead of the Chicago premiere of ELECTROGYNOUS. As Dance Editor at DancerMusic and lover of all things music and dance, I am honored to share with you his insights to this extraordinary work. Here’s what he told us:

This body is an archive equipped with both cellular and soulular memory.

Kristi Licera: While choreography is at the center of any dance concert, there are many additional components needed to complete an artist’s vision. One of the most important elements is the score design – the sound that accompanies and supports the design of movement. Dance makers yearn for the opportunity to have an original score created for them, but you developed the skills necessary to score your own work. Can give us some insight to how you began to explore designing your own scores, as well as how you developed (and continue to develop) the score for ELECTROGYNOUS?

Sabela Grimes: From the jump, let me state that I feel an “original” score accompanies everything that I do. Yes, everything! Here’s how I think about it, how I experience it on the daily: if I am walking through Leimert Park, on any given day, at any time, there will be a real-time-right-now ambient composition emerging from the environment that flows and intermingles with what I hear in my mind, feel in my heart, sense in the cells of my body, etc. This body is an archive equipped with both cellular and soulular memory. Now, despite the limitations of this present earth suit that I call “my body”, it has a remarkable ability to record and recall. Another amazing thing it can do is forget. As a result, I rely on external recording devices for “total recall”. But, peep it, I’m not concerned with the accuracy or correctness of the recording. It’s more about the energy, sonic texture and/or feeling tones. It’s mostly about how this sonic data is filtered through my imaginative processing. Note: I continue to realize that my imagination holds no limitations. This ongoing realization is super important to my way of being in the world. What we create is a reflection of imagination at work, right? I have, we have, the ability to generate pictures in the mind and sensations in the body to then manipulate our resources both material and immaterial and bring what was imagined into reality.

Ok, where were we?

Original scores. How? I began. I explore, keep beginning. I de-sign and re-assign these immaterial materials. I keep score, explode, conserve energy, sound can be, always is neither created nor destroyed. I play. I re-cord. I re-chord discord and continue. I respond. I re-call this body. I re-member these bodies do not inhabit a single point location. We flow. We synthesize, actualize, realize we rhythm. We be rhythm, which centers itself around itself, turning, returning, looping. The centers are multiple, they multiply to divide, they move to sound, form shapes. Energy in motion. Frequencies. Intersecting emotions circulating in-formation.

I continue in the tradition of active listening, the routine of sensing, the ongoing practice of being engaged, hearing, seeing, touching, feeling with multiple faculties.

…in regards to “ELECTROGYNOUS”, the sounds, sonic data, tones and melodies, coming from a multiplicity of sources, are woven into a tapestry embedded with the intention to imagine, contemplate and activate ‘BLACK JOY’.

Sabela: The “score”, it’s cultivated textures of sound lifted from a breathing archive, a living ARKhive. From the “I AM” perspective, I am an ARKivist. Hear to bear witness. To testify. To affirm. To wander and wonder. To get busy, get down, turn up, to dance vulnerable at the center of each fragile curiosity or alarming question. To trust. Trusting that the body knows the right sound and the composer is watching.

“I AM” is grammatically correct.

“I BE” is ontologically on point.

I BE a Sonic ARKivist, an improvisational curator of forms, media, mediums, channels, modes of transmission, interconnected black musical actions sounding from black archival source bodies at the interchange of time and space.

Original scores. How? I in-joy activating what I call “intuitive trust actions”. If I get the impulse to record what’s going on around me I do it. I trust that at some point the purpose of the recording will reveal itself. I used to carry around a cassette recorder in my bag. I’d pull it out and journal my thoughts, ideas, hum a melody, children laughing, that person hell fire preaching on the train, and so on. Now, instead of collecting cassettes and transferring the audio to different gear, I use an iPhone and iPad Pro. Therefore, the fluidity of my workflow maintains a better pace with the ever-abundant flow of my imagination. Using a handful of apps, I collect, arrange, rearrange, compose, manipulate and sculpt sound into a form that holds the integrity of the creative entity people call a show, project or my “work”. So, in regards to ELECTROGYNOUS, the sounds, sonic data, tones and melodies, coming from a multiplicity of sources, are woven into a tapestry embedded with the intention to imagine, contemplate and activate ‘BLACK JOY’.

Kristi: ELECTROGYNOUS is unique in that it grows and changes in several ways with each performance. In terms of movement, you shared with us that improvisation plays a large part in how you approach dance-making, and that improvisation is influenced by the materials and resources you continually introduce and present to your cast. Improvisation is also utilized in the video component of ELECTROGYNOUS; for each performance, the visuals change and are actually mixed and presented live. Can you tell us about some of the materials that influenced the upcoming Chicago performance of ELECTROGYNOUS, and how the growth of the work has influenced your artistry?

ELECTROGYNOUS is an enduring meditation articulating the following affirmation:

qualities of gender are

That affirmation remains actively integrated in our kinetic meditations on BLACK JOY. These improvisational movement scores flow within a visual architecture that is saturated in images of people who we’ve met on the journey of creating ELECTROGYNOUS. Meena Murugesan, whose character name is ELECTRO BEAMSTAR, and I have been collecting short video clips of Black folks responding to one directive: Think about something that brings you joy. We have also recorded Black folks deeply engaged in activities that stir an infectious current of joy. Presently, we have collected video footage from Black folks in different regions of the United States, South Africa, and Canada. And, we haven’t stopped! We’re like the BLACK JOY Collection Agency. What’s dope about ELECTROGYNOUS is Meena works with the projections intuitively and improvisationally. She remains actively engaged with what’s happening on stage. Call and response. This real-time creative structuring is a dialogue that includes projected images of BLACK JOY personified in the folks we’ve come across in our travels and people that were influential to the development of ELECTROGYNOUS like Grace Jones, Sun Ra, Prince, Alice Coltrane, Toni Morrison, Reverend Ike and Big Worm to name a few. Meena, through the use of projections, brings these folks in the room allowing the performers to continue the conversation and inviting the audience to listen in.

Experience the Chicago premiere of ELECTROGYNOUS at The Dance Center Columbia College Chicago (1306 S Michigan Ave, Chicago, IL 60605) Thursday, October 10 – Saturday October 12, 2019. All performances begin at 7:30pm, with a post-performance conversation with the artists immediately following the performance on Thursday, October 10. Tickets are available at tickets.colum.edu.

PHOTO CREDITS: All images of ELECTROGYNOUS by Gema Galiana