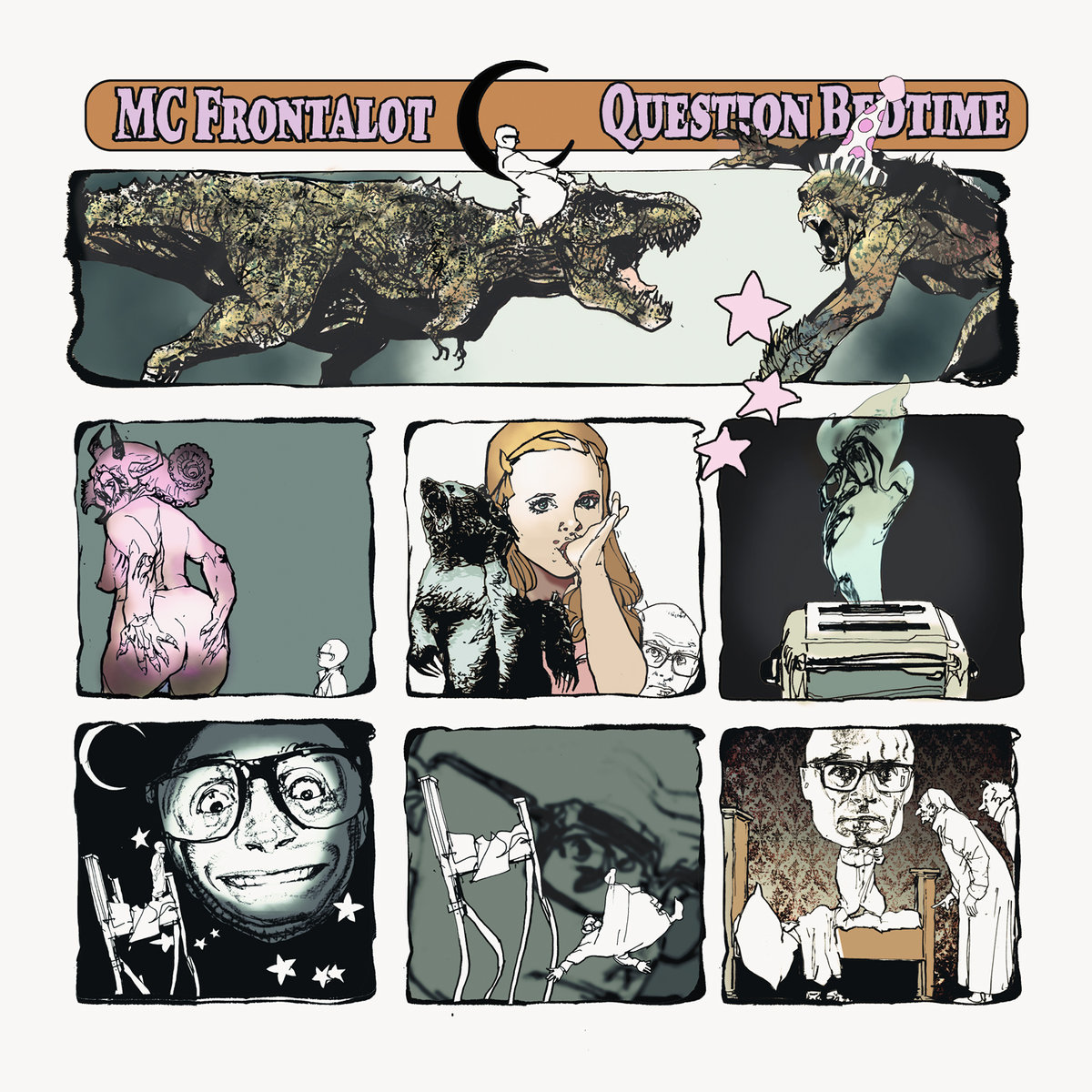 A lot of people already know who he is; MC Frontalot’s been making records and doing shows for a lot of people for quite a few years, and none of those people are likely to miss out on anything new he comes up with. If you’ve heard one of his other studio albums (Question Bedtime is his sixth), or if you’re one of the tens of thousands of people who have seen his completely unique take on what a rapper can be on stage, you would already have a pretty good idea that there’s way more here than what it looks like at first. If you had barely heard of him though, or maybe never heard of him, it would be all too easy to get the idea that this was just something that you already have a perfectly good category for. You might think that it’s just comedy, or maybe that Question Bedtime is just a young person’s record, or that the whole MC Frontalot story is just a novelty, and you could easily miss something that you might really enjoy.

In such a media rich but content poor world, it becomes common, and maybe even fashionable, for people to define, rate, and then file away anything new that they encounter. That might be the main reason why somebody who would have liked this album could miss it, because there are too many dimensions to what MC Frontalot is doing to be able to really define them. Besides, they’re all wired together into such a precisely designed circuit that as soon as you start to classify some of it, you’re bound to miss the rest of it.

Take his latest album for example. It’s true that there are a lot of moments on Question Bedtime that are really funny, but it certainly isn’t a comedy record, because it’s packed to digital zero with so much lyrical wattage and so much musical power. It’s also true that the musical tracks on the album are based on folk tales and stories for young people from around the world, some that you know and some that you don’t, but the way MC Frontalot and his extensive cast of collaborators and co-conspirators rhyme their way through these stories, they just aren’t like anything you ever heard before. There’s a lot that’s new in the way that MC Frontalot interprets rap and rhythm and writing and rhymes, and he puts it all together into an often (but not always) light-hearted approach that the press will call Nerdcore, but novelty this is not.

A new MC Frontalot album is a big event in the world of Nerdcore, and that’s probably where a lot of the confusion about what this album is, and who this artist is, comes from. Most people either don’t know what Nerdcore is, in which case they’re probably not that interested in what counts as a big event in that world, or they already do know, in which case they think they already know what this is, because it’s Nerdcore. None of that helps much because it’s not really true, or at least it’s not the whole truth. MC Frontalot is a musician working with a lot of other talented musicians, a rapper writing tracks layered with insight and perspective, and what he does includes such intense care for words and beats, production and performance, that it really isn’t anything with just one name.

As far as that part of the confusion goes, MC Frontalot can’t really blame anyone but himself, because he’s the one who named the scene ‘Nerdcore’ in the first place. Why and how he did, though, makes for an illuminating look into how, and why, he makes music. He talks about rap in the early nineties, and how he watched it change in some ways that really didn’t fit with what he wanted to do. “Even though rappers were serious about many topics,” he says, “everyone always had a sense of humor, and the idea of being clever, and clever enough to get a laugh, was something that had to be in every good rap song, or else you were going to be boring. That was accepted and acceptable.” It’s not so much that he objected to what changed as to what was being lost. “Then everyone started taking themselves so seriously later,” he continues, “which is fine too, but that’s not how I make stuff. I like stuff to always be funny, even when it’s dark, even when it’s difficult.”

The problem is that doing that makes him different, and when you’re different, you get dissected. “I guess I originally called it ‘Nerdcore’, and called myself ‘Frontalot’,” he says, “to kind of weed out a part of the audience, in a weird way. I only wanted people who I thought would have a natural affinity for the material, so I tried to make this thing that people would completely ignore unless they were going to love it.” You get a good idea of what he means when you see him live, because when you see the rowdy and irresistible celebration of whatever it is that everybody at his shows are celebrating, it’s pretty clear that the people who do love it know what it is.

Frontalot himself doesn’t do any proselytizing on the subject, “I did give it a name,” he admits, “but I was by no means the only force turning it into a real thing.” He goes on to mention mc chris, who makes an outrageously entertaining appearance on the Question Bedtime track “Devil In the Attic”, as well as MC Lars, who appears on Frontalot’s previous album Solved in a light-hearted but insightful track called “Captains of Industry”.

It’s hard to say whether Nerdcore is the scene that defines all of this, or if it’s a just-for-fun backdrop to a determined sense of musical innovation. When you ask MC Frontalot about it, it doesn’t seem like the scene has that much to do with trying to be anything really specific. It’s more a matter of not trying to be something that you’re not, or at least don’t need to be. “I think the defining feature of Nerdcore,” Frontalot says, “is that the people who make it don’t feel like they are the cool guy in the room all the time.”

That may actually be what sets it all free. “There’s less pressure to be pushing the cultural boundaries forward into trendiness,” he explains, “and leaping upon the Zeitgeist and all these things.”

Categories and definitions seem to matter less and less the more you hear his records, especially his latest, Question Bedtime. It’s a wild and intricate ride, put together with a precise understanding of how to drive a track from start to finish. Longtime keyboard collaborator Gminor7 puts together an unfailingly effective series of arrangements on top of the album’s hard-working beats (a combination of live drums laid down by Sturgis Cunningham and loops from beatsmith Baddd Spellah), and all of it gets polished and programmed until it somehow synthesizes fine art and mad science. On Question Bedtime, most of the tracks feature appearances by a diversely talented cast of guest artists, each of them completely in tune with Frontalot’s inspired sense of rhythm and rhyme.

All of it together makes Question Bedtime an innovation, but at its heart, it’s not really that much of a departure for MC Frontalot. On his previous albums, you find the same dedication to making the production shine, to bringing out the best in other artistic voices, and to writing stories and painting pictures that express thoughts as careful as they are well-crafted. It rides by at first as easily as a carefree good time, and that’s very much by design. As you listen to MC Frontalot a few more times, though, it all seems to get stronger and maybe even deeper; it just never gets too serious for its own good. In a way, it’s practically its own art form, an artistic uprising in a quietly defiant disguise, and if it’s a lot of real fun, that’s because the poetry and the music and all of the rest of it are real too.

FKJ Asks “Why Are There Boundaries?”