Press_Play – Mariana Oliveira, Amanda DeVenuta, Andrea Raby and “After You” 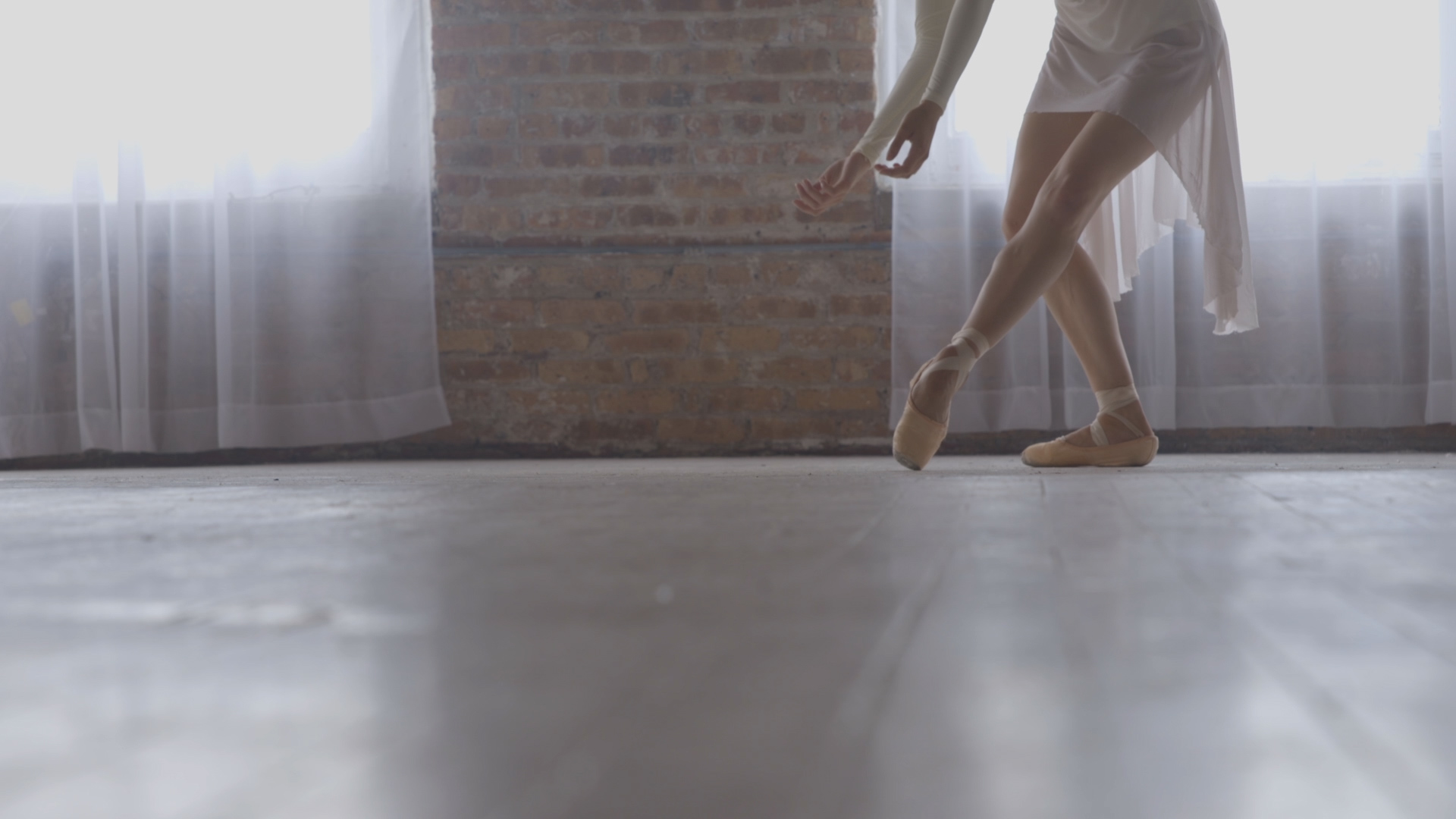 … the work they ended up making is an exceptionally successful venture into the wide open world of how to make dance for a camera.

As an art form, dance on film isn’t really that new. Because dance has always been such an integral part of popular culture, filmmakers have filmed dance almost from the time that film making became possible, more than a century ago. Yet it’s an art form that is in such a fluid, wildly variable state that it feels like something that is still at the very beginning of its deveopment.

There is an enormous range of ways that filmmakers, choreographers and dancers attempt to capture concert dance on a screen. Some dance films are simple front-of-house videos of a performance in a theater, some are largely dramatic with only a few moments of actual movement design, and others are abstract in the extreme, with movement that would be impossible in real time and in a fixed space.

No matter the approach, to capture the real beauty of choreography and concert-level performance on a screen is an immense challenge. Whatever it is that concert dance shares with an audience, it turns out to be very difficult to reproduce this, or even create an equivalent impact, when concert dance is seen not in person, but on a screen.

When Brazilian choreographer Mariana Oliveira and Kansas City Ballet dancer Amanda DeVenuta first began talking about making a dance film, none of those challenges really worried them. They weren’t even planning to release the project in any formal way, they only intended to share it with friends and colleagues. The idea of even making the film was motivated most of all by an interest in sharing another creative process with eachother, after working together and becoming friends when Oliveira created her work Beauty in Chaos for Kansas City Ballet.

Yet the work they ended up making  with cinematographer Andrea Raby is an exceptionally successful venture into the wide open world of how to make dance for a camera. The film is titled After You, and we spoke with Amanda DeVenuta, Andrea Raby and Mariana Oliveira about how they so successfully captured choreography and performance with a camera. Here’s what they told us:

To collaborate and give our visions and friendship the space to bloom was truly an unforgettable treasure.

Johnny: After You is exceptionally effective in an art form — dance on film — where dance sometimes struggles to be as impactful as it is in concert. The performance, the choreography, and the cinematography all come together to create an unusually coherent — and engaging — experience. All of this actually began with an idea that you brought to Mariana after working with her at Kansas City Ballet, and it seems as if the way that you and Mariana conceived of the project is an essential part of why it’s so successful. Can you tell us about the unique way that you originally thought of the project, and how that — and your creative understanding with Mariana — helped to determine what it became on film?

Amanda: Jasmine flowers and their romantic, enticing perfume is what inspired this work. Mariana and I both had our own separate experiences with the flower bringing us back to a memory. To collaborate and give our visions and friendship the space to bloom was truly an unforgettable treasure.

Johnny: You, Mariana, and Amanda had not worked together before doing this project. Mariana actually found you through a series of online searches. Because she was interested in putting together a production team of women, she searched for women film-makers in Chicago, and that’s how you initially got involved. Can you tell us if any of the issues that Mariana raised about the challenges that women face in ballet resonate with your own experiences as a film maker?

Andrea: When Mariana told me about the difficulties that female choreographers have in the Ballet field, I really felt it mirrored the film industry as well. Women usually get overlooked or forgotten for creative positions of power, such as director and director of photography. Recently, there has been a push within the industry for people to take a look at their crews and see where they may have been able to hire more women or people of color, which is a huge step forward, but there is definitely still a gap in representation. So when Mariana approached me for this project, I was all in.

I think representation was in all of our minds as we were creating this project. I ended up bringing on a female editor, Amber Love, to edit the piece and create the behind the scenes video. But I think more than anything it created a sort of ease and mutual respect on set that helped us all feel comfortable bringing up ideas and working to make the best project we could. Plus, both Mariana and Amanda have such strong artistic visions that it was easy to take those and create a film that stayed out of the way and let the piece speak for itself.

This kind of black and white duality is present in almost all of my works.

Johnny: You’ve said that After You — the dance film you made with Amanda Devenuta and filmmaker Andrea Raby — came out of nowhere. It’s a project that turned out so successfully that it’s remarkable to hear that you had no special expectations for it, that it was only meant to be a project that you would share online. Can you tell us more about what led up to making this film, and what inspired the your choreography?

Mariana: I think it all started when I was creating Beauty in Chaos at the Kansas City Ballet. Amanda was my leading dancer and I was quite impressed by her technique and her artistry. Kansas City Ballet is a really-dear-to-my-heart company. Devon Carney has been a great supporter of my works. I think that’s the beauty of what I do. It’s not only connecting with your audience but also the relationships you build with the people you work with. And Amanda and I became really close friends.

So it all happened last summer when I was on a vacation trip to Mexico, and I shared a photo of this beautiful Jasmine flower wall that surrounded an entire building. She mentioned that Jasmine was her favorite flower, and it’s mine as well. And she asked me to create a solo for her based on this idea. And she is such a beautiful dancer that I said yes immediately.

I think flowers in general carry with them this duality of the powerful, strong, captivating scent versus the fragile, delicate petals. This kind of black and white duality is present in almost all of my works.

I didn’t want to create something for the stage with a traditional format, so that’s where the idea of making a short film came from. At the same time I had no intention to make a viral video. The goal was to CREATE. All of my works are quite personal, and reflect a specific time in my life, so I wanted to express in movements all the words I couldn’t say and all the feelings I was experiencing at that time.

Another aspect is that it’s an all female collaboration. I’m always interested in supporting female artists. So I came across the work of filmmaker Andrea Raby, and she was extremely excited about making a dance film, which was a first for her. We talked about shooting on location and we came across Studio 415, which is a vintage building located in the South Loop, surprisingly also owned by a woman.

When I was thinking about the concept of the piece, and which music would I choose to tell this story, I couldn’t think about anyone else but Heitor Villa-Lobos. He is one of my favorite classical composers and his music always touches my heart. After You is about a next chapter. Letting go of the things or people that no longer impact your life and opening yourself to new possibilities. It’s a melancholic piece but very hopeful as well.

After You is at Vimeo.com and you can see excerpts from other works by Mariana Oliveira at her channel on Vimeo. You can also learn more about Mariana at MarianaOliveira.net.

You can learn more about Filmmaker and Producer Andrea Raby at her site AndreaRaby.com.

Look for future work by Mariana Oliveira at The Carolina Ballet’s A Celebration of Female Choreographers in March, 2020 and at Chicago Repertory Ballet in April, 2020.

PHOTOS: All Photos by Amber Love