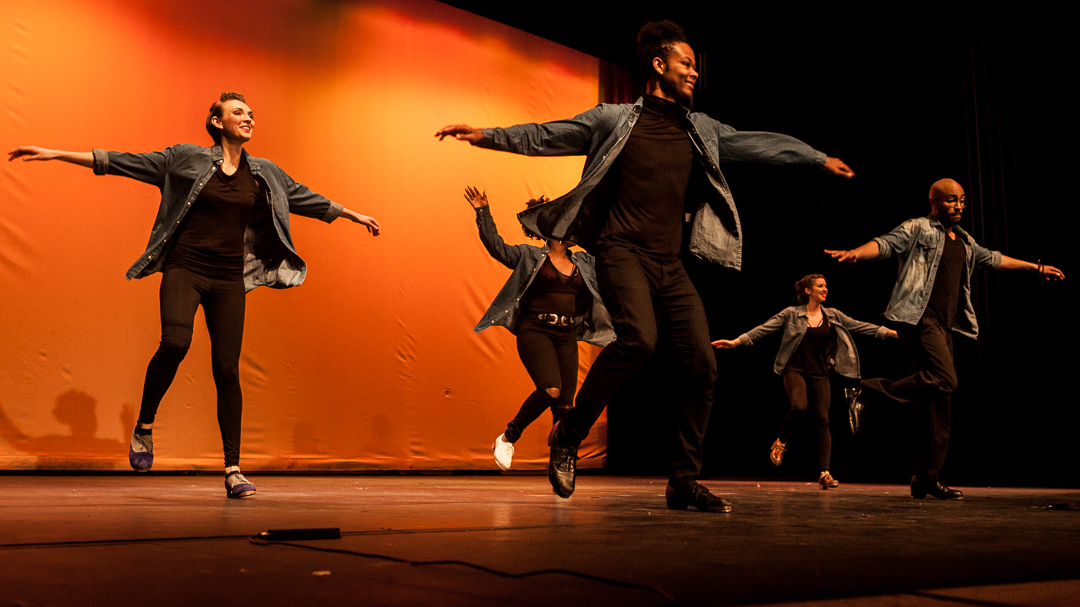 If you had just happened to walk in on one of Chicago Human Rhythm Project’s annual STOMPING GROUNDS performances, that would have been amazing enough.  STOMPING GROUNDS is a series of concerts that Chicago Human Rhythm Project has presented across the city of Chicago for the past four years, and it’s not like anything else. Chicago Human Rhythm Project brings together a real all-star lineup of percussive dance companies, and to see the bright, energetic, irrestible enthusiasm of percussive dance in so many different forms, from so many different artists, steeped in the heritage of so many cultures, well that wouldn’t just be amazing,  that’s more like a waterfall of amazing experiences, moment after cascading moment.

The whole idea is very much based in Chicago Human Rhythm Project’s determination to share as widely as possible what they know percussive dance can mean. “Chicago Human Rhythm Project builds community through American tap and contemporary percussive arts in world class, innovative performance, education and outreach programs,” is the way they express that vision at their site chicagotap.org, and the intersecting lines of community, geography, history and artistry that is STOMPING GROUNDS is a vivid illustration of what they mean.

Amazing as that would have been, the Grand Finale of STOMPING GROUNDS promises to be all of that and more

You could have been a lot of different places in Chicago if you’d seen one of those performances, because STOMPING GROUNDS’ presenting partners have included some of the city’s most iconic cultural venues, like the Chicago Cultural Center, the Beverly Arts Center, the Irish American Heritage Center, the National Museum of Mexican Art, the DuSable Museum of African American History, and the Garfield Park Conservatory. What you would have seen would have been three or more of the highly accomplished percussive dance companies who Chicago Human Rhythm Project brought together this year for STOMPING GROUNDS, and each of them would have taken you on a rich, unique journey into their creativity.

Amazing as that would have been, the Grand Finale of STOMPING GROUNDS promises to be all of that and more, because all of the outstanding companies who have performed in STOMPING GROUNDS this year will be there: CHRP’s Stone Soup Rhythms (American tap), Ensemble Español Spanish Dance Theater, Mexican Folk Dance Company of Chicago, Muntu Dance Theatre of Chicago (African), Trinity Irish Dance Company and the Trinity Irish Dance Ensemble, Chicago Dance Crash (Urban Fusion) and Natya Dance Theatre (Indian).

It all happens Thursday, June 7 at 7pm at the Pritzker Pavilion in Chicago’s Millennium Park, and there was so much that we wanted to learn about all of the dimensions of this multifaceted event that we asked Lane Alexander, Founder and Director of Chicago Human Rhythm Project, to give us a little more insight into STOMPING GROUNDS. Here’s what he told us:

Johnny Nevin: Stomping Grounds has been performed all across the city this spring — since its kidkoff on April 2 at The Cultural Center you’ve done six performances already. It’s such a unique idea, to bring together such accomplished companies into a single program. For anyone who hasn’t seen it yet, can you tell us how the show works — how all the great companies in the show present their performances, and how it all comes together?

Lane Alexander: First of all, I have to mention that Chicago’s percussive dance community is as unique as it’s architecture and is easily one of the richest in the world. The companies that are in STOMPING GROUNDS represent more than 300 years of cultural practice in Chicago and literally thousands of years of unbroken strands of rhythmic expression – passed down from one dancer to the next for centuries and millennia.

Rhythm is a universal language, and while we speak many different dialects, we all understand each other and we intentionally dance together as a way of showing solidarity and celebrating a shared cultural heritage

STOMPING GROUNDS presents spirited and unique combinations of these African, Irish, Indian, Native American, Mexican, Spanish and American percussive dance companies in rhythmic expositions throughout Chicago for 10 weeks. Rhythm is a universal language, and while we speak many different dialects, we all understand each other and we intentionally dance together as a way of showing solidarity and celebrating a shared cultural heritage. STOMPING GROUNDS shines a very bright light on the ancient, but still relevant and always evolving arts of rhythmic expression.

Practically speaking, we take STOMPING GROUNDS on our own magical, mystery tour to many of Chicago’s beautifully diverse communities to perform in cultural centers like the DuSable Museum of African American History, the National Museum of Mexican Art, the Irish American Heritage Center, Beverly Arts Center, Garfield Park Conservatory . . . and more! Each performance features a unique combination of three or four of these companies, which always creates a different dynamic and experience. You’ll see and hear an African dance celebrating the birth of a child followed by an Irish jig, a sensual flamenco duet followed by a very urban fusion of hip hop and acrobatics, an ancient and beautifully intricate Indian dance beside an all out American tap dance.

At each venue, one of the companies is designated as the “host” which means they present the most work followed by the “guest” company and “featured” company. Since most of these forms are rooted in community practice, the separation between the audience and the performers is less formal and we actively seek to tear down that separation. Company directors get to tell the audience a little bit about each dance and answer questions sprinkled throughout the event, and free classes precede performances in which entire families can be found learning a few new steps together!

What has been forgotten over the last 3,000 years, is that rhythmic dancing was almost always part of a sacred ritual and one in which the dancer  . . . in some cases a shaman . . .opened a portal between the spiritual and physical plain.

We also take STOMPING GROUNDS to elementary and high schools in a slightly different version we call WE ALL GOT RHYTHM which includes a lecture-demonstration and master classes. In We All Got Rhythm, one dancer from five different companies perform short solos and teach the students about their heritage. Again, our goal is to appreciate our different ways of expressing ourselves and to celebrate the fact that we all “speak in rhythm”. The neighborhood and school programs almost always end with a jam session which usually bring the audience and students to their feet . . . to join in! The Human Rhythm Project was founded to bring people together . . . different people . . .people who don’t live next door to each other . . . to celebrate rhythm and to recognize that shared bit of humanity.

What has been forgotten over the last 3,000 years, is that rhythmic dancing was almost always part of a sacred ritual and one in which the dancer  . . . in some cases a shaman . . .opened a portal between the spiritual and physical plain. In our highly secularized society, this idea seems “fantastic,”  but people leave the concerts feeling renewed, uplifted and completely energized. This isn’t accidental and we’ve seen audiences grow every single year for the last four years . . .many people following us from one neighborhood to the next for the entire festival and bringing more friends each year. In our very polarized times, STOMPING GROUNDS calls us to acknowledge each other and through the simple acts of dancing  and making rhythms together, build the relationships that will lead to peace.

Johnny: What about Chicago Human Rhythm Project. Stomping Grounds  is just one example of CHRP’s groundbreaking presentations. What’s coming up in the next few months?

Lane: The STOMPING GROUNDS 2018 Grand Finale on June 7 is also the kick-off for CHRP’s 30th Anniversary season which we’ll be celebrating through July 2019! As soon as we recover from the finale, (the next day) we’ll pivot immediately to the 28th edition of our summer festival of American tap – RHYTHM WORLD (July 16 – 22) – which attracts hundreds of tap dancers from around the globe to concerts and classes with some of the greatest living masters of the art form. The performance week, curated by our brilliant Artist in Residence, Dani Borak, opens at the historic Jazz Showcase – a natural home for tap since American Jazz and tap are first cousins – and continues July 17 at the FIne Arts Building’s Curtiss Hall with a student showcase and improv tournament. Wednesday, July 18, we’ll perform at the Polk Bros Performance Lawns at Navy Pier and on July 20 and 21 we’ll present our virtuosic and genre-bending faculty in concert at the Studebaker Theater – also in the Fine Arts Building. The same week will feature extraordinary education programs taught by the same artists in courses, workshops, master classes and immersion programs like the only STOMP Intensive in the world, the Youth Tap Ensemble Conference and a Teacher Certification Program.

Year-round, we also have our “school” the American Rhythm Center, which is a social enterprise that provides a wildly diverse array of dance classes, but is also a business development center/incubator for independent artists and small companies. 2019 is when the volume really gets turned up as we present the 5th Annual STOMPING GROUNDS festival with the Chicago premier of the israeli company MAYUMANA at the Harris Theater, followed by an expanded ten weeks of neighborhood performances and school residencies. STOMPING GROUNDS 2019 will end where it started, at the Harris Theater, with another ground shaking presentation of Chicago’s greatest foot drummers! We’re stretching the anniversary year to include the 29th annual summer festival which will feature a show created in collaboration with Dani Borak – 9 Point Ink. There’s more, but that’s probably enough for today!