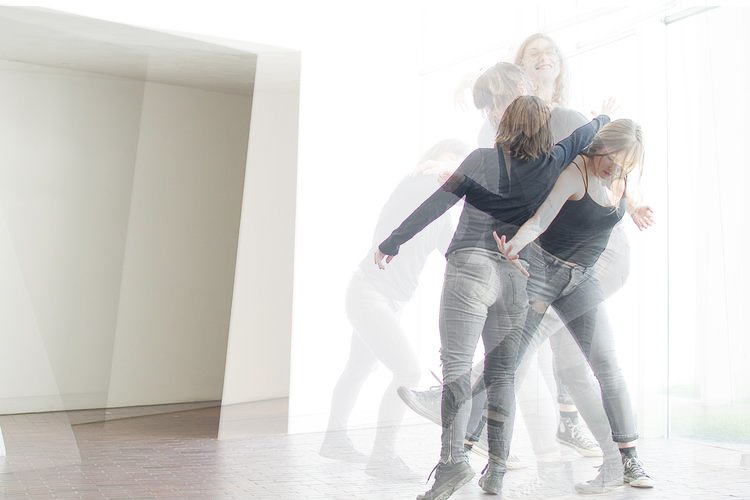 Including the works to be shown in this year’s concerts, HCCDF has presented 226 pieces of choreography…

For many, no autumnal season is complete without a Thanksgiving celebration. And this autumn, Harvest Chicago Contemporary Dance Festival and its ever-growing network of artists has much to give thanks for. This weekend and next (September 20-21, 27-28), HCCDF celebrates ten years of presenting new works and works-in-progress of practicing choreographers. DancerMusic recently spoke with HCCDF Co-Founder and Producer Nicole Gifford about the history and growth of the festival. but there was so much to share that we had to learn even more from the festival’s other mastermind (also Co-founder and Producer), Melissa Mallinson.

Over ten years ago, Mallinson and Gifford had run the gauntlet of choreography festivals in the Midwest, and sought new avenues and audiences to share their work with. But the two were practicing choreographers in the middle of their creative careers. The festivals that surrounded them were either meant for emerging artists (those just starting out) or well-established choreographers (those with large company commissions or an established, recognized company to set their works on). They knew they weren’t the only dance makers facing this problem, and it just so happened that they possessed the skills necessary to do something about it. Both Mallinson and Gifford had experience producing concerts. Mallinson produced Old Town School of Folk Music’s World Dance Night from 2005-2009; Gifford produced her evening-length work Miles Electric (2009) which exclusively featured live music from Miles Davis’ electric period. This expertise, plus their combined experience participating in festivals, were the seeds that would blossom into the bountiful harvest that is HCCDF.

Including the works to be shown in this year’s concerts, HCCDF has presented 226 pieces of choreography — each complete with full technical and stage support. In addition, the festival continues to serve as hub for artists to network. Those connections have produced new collaborations that contribute to the ever-growing creativity of artists in Chicago and beyond. In this INSIDE, Melissa Mallinson shares her insights to the community of artists at HCCDF and the impact the festival has had on its participants. Here’s what she told us:

When you feel like you are supported, it allows you as a choreographer to focus your energy on the work.

Kristi Licera: Presenting a work with full production support is something that choreographers, no matter their level of experience, are constantly on the prowl for, but HCCDF provides something even more valuable – a chance to network with the vast community of artists it has curated. Can you tell us more about how you and Nicole approach creating and nurturing the synergy between the artists presented at HCCDF? Were there personal experiences in your respective careers that informed how you wanted to bring artists together?

Melissa Mallinson: Hosting a warm, welcoming, quality event for artists is one of our main goals. Having run small dance companies, we understand what it takes to handle all the production logistics while simultaneously trying to create your art. It takes a lot of resources, both monetary and mental. We also both shared work in many different showcases, festivals and other venues. When you feel like you are supported, it allows you as a choreographer to focus your energy on the work. We think it’s important for practicing dance artists to meet, see, appreciate and network with others and know they’re all part of something to be proud of.

To be a part of their artistic process, and give them the time, space and support they need to keep working is our honor.

Kristi: Providing a platform like HCCDF not only nurtures the artists that participate, but also adds to the rich tapestry of dance and dance making in Chicago and beyond. Can you tell us about some of the partnerships and collaborations that have been born from artists connecting at HCCDF? How have those in turn enriched the environment and programming at HCCDF?

Melissa: Every year, we love witnessing the connections that take place at HCCDF. Our artists discover they have shared collaborators, teachers or university experiences. Artists have met in our festival before or at other venues around the country, and sometimes cool new connections happen that enrich the Chicago dance community.

For example, choreographer Aaron McGloin performed in HCCDF as a dancer with a NYC-based company Project44, led by Gierre Godley. The following year, McGloin applied with his own choreography and was also commissioned by a local company to create work (Godley also made a return this past winter and produced a mini-festival in Chicago at Lou Conte Dance Studio). A similar thing happened with Jeff Fouch of the Columbus Moving Company, who performed with Kristina Isabelle Dance in our first year. Fouch returned to HCCDF twice with his own amazing works. And local companies Aerial Dance Chicago and Elements Contemporary Ballet have collaborated on several full evening-length works after connecting at HCCDF.

Philip Elson, who performs regularly with The Seldoms, premiered a work-in-progress one year that was later developed into a full show produced by the Dance Center of Columbia College. Other companies like Same Planet Performance Project and RE|Dance Group have also shared excerpts and works-in-progress. That exemplifies our mission to celebrate practicing choreographers. To be a part of their artistic process, and give them the time, space and support they need to keep working is our honor.

For more information on the participating artists and their work, visit www.hccdf.com.